Justin Drew Bieber is a Canadian pop musician, actor, and singer-songwriter. Justin was discovered in 2008 by American talent manager Scooter Braun, who came across Bieber’s videos on YouTube and later became his manager. More recently Justin has been making media attention for his increasing number of tattoos. Check out our Justin Bieber tattoo list below:

Justin started off with a few tattoos on his arm, including an owl and a tiger.

Justin also has an angel tattoo that is said to resemble Selena Gomez. 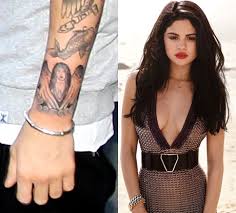 Before getting his sleeve tattoo filled in Justin got the following, believe tattoo with the eye along with a knight.

The finished product looks much better, after that addition of the rose and some shading it looks much more complete.

The singer has unveiled a new inking on the right hand side of his neck, saying ‘Patience’.

Justin has a small crown along with a date tattooed on his chest.

Justin Recently got a tattoo of a cross tattooed on his chest.

Check out Justin’s body tattoos below

Here is a clover lookm the cross looks great and his sleeve tattoos have been filled out with great shading.

Justin Bieber Back of Neck Tattoo

Justin has recently had angel wings tattooed on the back of his neck.